You know that feeling you get when you’re making a cake, and after you’ve mixed the batter, poured it into the pan, and put everything in the oven, then you realize one of the ingredients—perhaps the eggs—is still sitting haughtily on the kitchen counter instead of in the cake, where it belongs? Those were Honda CR-Z cars. 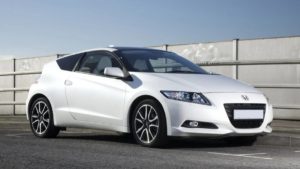 The cake without eggs, since the list of ingredients for the tiny coupe, looked really good. Honda marketed the little Z as a sporty hybrid, with its petrol-electric drivetrain offering an ideal fusion of fun and efficiency.

It had a pinched rear deck that was reminiscent of Honda’s iconic CR-X from the 1980s. It also looked sharp as a pin, particularly in white. Most, if not all, Hondas look better in white.

As dynamic comparisons, Lotus Elise and Mini Cooper were mentioned. It had a finicky six-speed manual transmission. It’s all very positive.

However, Honda’s sporty hybrid was missing one thing: any sporting appeal. The CR-Z only managed to produce 121 bhp with its electric and gasoline engines. These engines were working as hard as they could, and they had slightly less torque than a Nutribullet.

It took about 10 seconds to go from 0 to 60 on a long stretch of road. Although it was very challenging to get the Honda CR-Z moving quickly enough to check, it’s possible that the handling was clean. Cost-effective? Yes. Exciting? Actually, no. Shame.