Hyundai this week unveiled Hyundai Home, a service that enables electric car owners to shop for hardware for home charging, solar power, and energy storage on a single website. 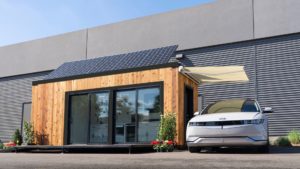 Hyundai Home was introduced in 2021 as a home-energy ecosystem. It is now offered in 16 states, based on a press release from the 2022 Los Angeles auto show. According to Hyundai, the service will be managed by dealerships within these states with help from partner business Electrum.

Hyundai Home appears to be mainly a platform that connects energy storage systems, solar panels, and home charging stations that can be purchased all at once. Additionally, it offers three estimates for every installation from the network of electricians at Electrum. According to Hyundai, Electrum will also offer “energy advisors” to help customers via the process.

Hyundai Home is currently lacking hardware that attempts to address the E-GMP platform’s off-the-grid functionality. This could prove to be a good alternative for consumers swamped with the enormous variety of possible combinations of home-energy hardware.

Cars built on this platform, like the Ioniq 5, have bidirectional charging capabilities. This theoretically enables them to transfer power into a home energy storage system whenever necessary.

Ford, in contrast, is offering a system that allows F-150 Lightning owners to power their homes during a blackout. However, it does not yet make use of the grid-assistance features of bidirectional charging.

The equipment for bidirectional charging was present in the Nissan Leaf for many years and was accessible in other markets. Despite this, Nissan just recently approved a bidirectional charger for the Leaf in the United States. The automaker asserts that allowing electric vehicles to even out demand fluctuations can reduce strain on the grid.

The Hyundai EV push in the United States will include other components as well. It has made hints about expanding the subscriber base for its Ioniq electric vehicles. But as the electric car lineup grows, these details might take shape, similar to how Hyundai Home did. The Ioniq 6 sedan and Ioniq 7 SUV are expected to arrive in the United States in the first quarter of 2023 and 2024, respectively.